Craft is all about the process and by inviting the community to get involved, we hope to break down the idea that it is something that only artists and crafts people can do.  Although some elements will have already been undertaken, the majority of the process will be shown to highlight the journey from beginning to end result

Having made initial tests with a small amount of the clay sourced from the new White Hart Lane stadium site, we discovered that it did not like certain temperatures, definitely liked to shrink and changed colour accordingly!

A few before and after shots of colour…

After and before firing

Playing with textures and form 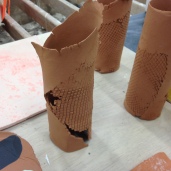